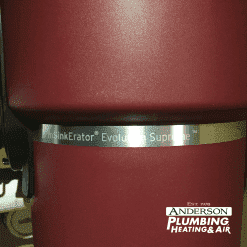 About a week ago, I was washing a mountain of bottles. I looked down and noticed water collecting around my feet!

I threw open the cabinet, and sure enough, we'd sprung a leak. I removed a washtub full of cleaning supplies to find a pool of water and warping wood underneath. Honestly, I actually discovered this a couple of months ago (it wasn't nearly as bad) and we wrote it off as water somehow being splashed from the sink. I was supposed to keep an eye on it to see if the water returned and I completely spaced it...until I found myself standing in a small pond a month later.

After some investigation, I determined that it was coming from the garbage disposal, running down where the cord comes out AND it seemed to be coming out of the seams at the bottom (which I thought it was weird that it would even have exterior seams at the bottom). I didn't even try to figure out what was wrong with the garbage disposal. It was obvious that diagnosis and repair would probably cost the same or more than just replacing it with a newer (and better) model.

I called up Anderson and I told them that I was willing to spend a little more for a quality model. I was interested in performance because we put our kitchen through the paces! Plus, I thought it might be a nice, little perk when we sell the house. For the record, my husband said we probably only needed a 1/2 hp... Anderson recommended the 1 hp InSinkErator, and I really do trust their opinion. Hubby said ok... and we couldn't be happier!!! The InSinkErator Evolution Supreme simply kicks butt! A really pleasant surprise I wasn't even thinking about? It's SO quiet! The, I don't know what it's called...rubber drain guard?...actually backs a bit of water up (it's probably really a different mechanism that does this), and baffles the noise of the garbage disposer.

Bottom line is, I love it, husband loves it! No buyer's remorse here! - Jenn B.