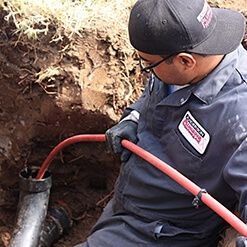 A San Diego senior citizen was having major drain issues and no way to repair them. The chronic drain problems had a lot to do with a major tree root intrusion. She couldn't afford drain clearing, let alone replacement of her deteriorated 60-year-old sewer lines. Her water supply was unreliable and she was faced with back-ups every other week.

A Role Model for Kindness

This Random Acts of Plumbing, Heating & Air recipient epitomizes the mission of our pay-it-forward program. In her own life, she has been generous to those in need and has set an example so that her children would continue to do the same. We were honored to have the opportunity to help her. Most recently, she had sewn small cloth back packs and stuffed them with school supplies that she picked up at Big Lots. Her daughter passed them out to homeless children in San Diego. This inspired her other daughter and she made about 75 fleece caps that her sister passed out to the homeless as well. This is only one tale of this family's charitable actions.

What Goes Around, Comes Around

This woman did not make such kind efforts with the expectation that they would be reciprocated. But we are thrilled to be able to give back to her in her time of need. We replaced the sewer lines that were practically beyond repair, and we used epoxy pipe relining with our trenchless pipelining system. She now has all new piping within her existing piping the problem is permanently solved. It was a two day process and well worth it!
Categories