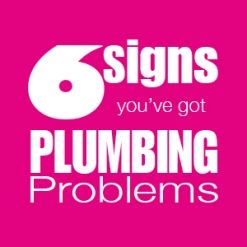 Keeping your San Diego plumbing in tip-top shape requires vigilance. In general, if you catch a problem sooner rather than later, you'll be able to get it fixed more easily and at a smaller expense.

Keep an eye out for warning signs that your plumbing is faulty, including the following:

If your faucets are regularly sputtering after you turn them on, you could be experiencing a serious plumbing problem. When your faucets are sputtering, it's a sign that there's air in the pipes, which means that somewhere in your system a pipe may be broken or blocked in some way. Chronic sputtering means it's time to call a San Diego plumber.

It's normal for a toilet to sometimes get backed up, especially if it's a small problem that can be taken care of by using a plunger. You're looking at a potentially more serious problem if your toilet is frequently getting backed up, with the water level seldom settling right; it's either too high or too low in the bowl. Also, make note if there are unusual foul smells or if the toilet is making odd noises. These issues can point to problems with your sewage lines and sewage drainage.

A dripping faucet can sometimes result from a superficial leak that doesn't necessarily require professional assistance to fix. Other times, the reason the faucet is dripping isn't so clear. It could be indicative of a bigger plumbing issue and should be investigated by a professional.

Mold springs up in moist conditions. If it's growing on walls or ceilings, in your bathroom or basement for instance and there's water appearing where it shouldn't. Mold in and of itself is a health hazard and should be removed, but you also need to address the underlying issue.

Let's say you took a shower a few hours ago, and now there are some odd wet patches on the walls, ceiling, or floor of your bathroom when the room should have already been dry. If you keep running across puddles and damp spots, don't hesitate to call a San Diego plumber to investigate the source.

6. Strange odors in your sink or shower

Strange odors are one potential sign that you've got a blockage in your drain or a build-up of smelly residue in the pipes; dumping drain cleaning fluid into the drain to clear out the problem may not always work and could just damage your pipes. There are also other reasons for weird smells. If a pipe is corroded, you may get a rusty sort of smell when you turn on a faucet or use the shower. Sometimes it's a problem with your water heater, which could also be a source of smelly water. Don't wait to get these problems checked out. Contact us to discuss the issues you're experiencing so that we can investigate what's going on and implement a solution as soon as possible. Delaying could lead to damage to your home, costlier repairs down the line and higher water bills along the way as your faulty plumbing wastes water.