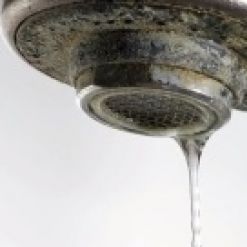 If you’ve lived in San Diego for any length of time, then you know we have hard water. The evidence can be found on your San Diego plumbing. Most people can see the deposits it leaves on sinks, faucets, and showerheads. If it can do this to your faucet, is it a good idea to drink it?

Doctors say not only is San Diego’s hard water okay to drink, it may actually be better than some soft water. Soft water typically contains more sodium, which can be more problematic for a lot of folks. According to the City of San Diego, we have some of the hardest water in the country. We import most of it and it picks up minerals as it travels through rocks and soil. But what in it actually makes it hard? It’s generally the magnesium and calcium content. Water is considered soft if these minerals are at less than 75 parts per million. Moderately hard is 75-150, hard is 150-300 and very hard is more than 300. San Diego City can range from 229-325. Many people don’t like the taste of unfiltered tap water. High mineral content can certainly affect the taste. Many filters can remove impurities but not all of the minerals, but doctors say that’s a good thing. Distilled water would have the minerals removed, but that's a disadvantage because hard water actually provides a little dietary calcium and it has fewer unhealthy heavy metals. It may not lather well, but it’s also not harmful to your skin.

This is why a Flow-Tech Home water treatment system is such a great alternative...it doesn't remove minerals, but rather renders them harmless to your plumbing system and appliances. It's not the minerals in the hard water that make it unhealthy, it's the chemicals used to treat it that you don't want to consume. Flow-Tech is the optimal solution to hard water because it's green (no water waste), it's healthy (no minerals removed) and it's maintenance free (no salt or potassium tablets to add). The icing on the cake is that it saves you money through energy efficiency, extended life of plumbing fixtures and appliances and reduced soap/detergent/cleaner usage.